Home About Us
Paul Bell 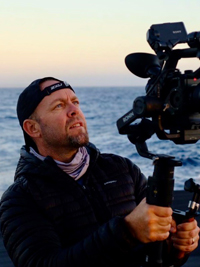 
For over 20 years, Paul Bell has worked in the film & television industry producing a wide range of content for national and international audiences, from the remote bush of Australia, to the streets of Tokyo and the wilderness of Antarctica.

Originally from the southwest of WA, Paul moved to Broome in 1996. He joined David Batty of Rebel Films working throughout the Kimberley on various documentary and educational projects. In 2001, Paul was accepted into AFTRS in Sydney to study cinematography in documentary, returning to establish his own production company, Feral Films.

Over the last 10 years Paul has worked around the world as a freelance director, cameraman and editor for Lonely Planet TV, National Geographic, Discovery, Eurosport, ABC, SBS and CAAMA Television. Career highlights include working with the United Nations recording traditional knowledge of climate change with indigenous peoples and travelling to the vast continent of Antarctica.


Meredith joined the Feral Films team in 2007, following extensive travel in North America, Europe, Asia, Australia and New Zealand. Meredith runs the administrative and production management side of the business, with a wide variety of production experience including projects for Lonely Planet Television/National Geographic Adventure Channel and Singapore’s Mediacorps Channel 5, and work on the award winning feature film, Mad Bastards.